Craig J. DiPetrillo, entrepreneur and designer, holds a background in architecture and engineering, as well as maintaining his certification in code enforcement as a Rhode Island State building inspector.

With his extensive knowledge in the building field, Craig applied it all to his design and development of the Thermally Pre-Insulated Pipe Clamp.

He first discovered the need for such a product during a mandatory Building Officials conference, which was conducted in Warwick, RI, in early 2013. The primary purpose of this meeting was to familiarize code enforcement officials with the then-coming 2017 Energy Conservation Code.

Craig DiPetrillo remembers sitting in a mandatory building officials conference in Warwick, R.I., in early 2013 set up to familiarize code enforcement officials with the then-coming 2017 energy conservation code. “I wasn’t an active building official at the time,” said DiPetrillo, a contractor, engineer and Rhode Island-licensed building inspector. “But I was there as I’ve always had a fascination with the codes and a love of networking.”

His lifelong MacGyver-like passion for exploring obstacles and creating solutions was kindled when the professor conducting the seminar acknowledged there was a gap in the International Code Council’s International Energy Conservation Code that made it difficult to enforce. “He, said, ‘Whoever creates this product, will change the industry,’” DiPetrillo remembered.

Eight years of perseverance later, he not only created a product to plug that gap but started a foundation that will funnel much of the proceeds from the sales to providing financial assistance for children who have chronic or potentially terminal illnesses. The product is called The Cozy Clip™, patented in the United States and several other countries, including Europe, Germany and Canada.

The problem, DiPetrillo explained, is that when you secure the pipe to a joist at a juncture, the current procedure puts the pipe up against the joist. The Cozy Clip provides insulation all the way around the pipe after being secured to the joist. The Cozy Clip — soon to be available from DiPetrillo’s new company, InsulClip — has a tighter fit compared to the un-insulated pipe clamp that rests directly on the surface when installed, leaving a space of 1.5 inches between the structural member, making it physically impossible to insulate. The pre-assembled Cozy Clip’s talon design, with compressed thermal insulation made from half-inch foam insulation, provides universal sizing, DiPetrillo said, meaning it’s a one-size-fits-all solution. Moreover, laboratory test results, including those done through ICC Evaluation Service (ICC-ES), showed that the pre-insulated pipe clamp is 21 percent more efficient and maintains an R3.4 to R7.1 value when compressed, compared to using an un‐insulated pipe clamp. 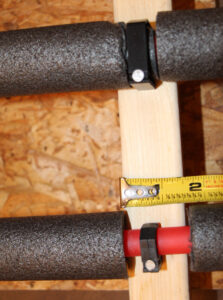 The Cozy Clip is recognized by the Code Council with an ICC-ES Listing Report ESL-1246 and Marketing Claim Verification ESV-1016 and should be ready for the market this summer. DiPetrillo said it took a lot of hard work and a lot of great help from both the Code Council and ICC-ES. It meant a lot of time in-between work, kids’ athletic games and life in general to accomplish. “There were times when I thought of giving up,” he said. “But there always would be someone who would ask me, ‘How is that invention of yours coming?’ That got me going again.”

Bill Nash remembers being one of those people. “I would see him at a conference and I could tell he was at a crossroads,” said Nash, senior regional manager of Government Relations for the Code Council in Rhode Island. “Fortunately, with my connections, I was able to kind of shepherd him along, suggesting people to talk to, getting him to ICC-ES.”

Nash, who has known DiPetrillo for years, isn’t surprised he stuck with it. “I could see from the beginning he was on a mission and had the drive to see it through,” Nash said. “He’s a do-er.” But what DiPetrillo will do with much of the revenue from his new product really shows his character, Nash said.

Last year, DiPetrillo founded “God’s Little Blessings™,” a non-profit organization that provides financial assistance for children who have chronic or potentially terminal illnesses, that may progress if not treated. Treatments for some of these health conditions are curable, according to the organization’s website, while others may need to focus on improving the comfort and quality of life for terminal illnesses. God’s Little Blessings receives donations from individuals, corporations, businesses and revenue profit streams. These donations help to provide the care that is needed for families who may be struggling to help to save their child’s life, or give them the comfort and care they need during a terminal illness.

DiPetrillo, who lives on and oversees a working farm, said he got the idea for the charitable organization while volunteering to be the Easter Bunny for seriously ill children at a local hospital. “One little girl wouldn’t let me go; she just kept hanging on,” he said getting choked up. “But to see the faces of the parents watching their kids enjoy life for a few minutes; they were crying. Those people were just waiting for hope.”

But one time, hope was even more personal. Years before the Easter Bunny visit, DiPetrillo remembers one of his boys telling him, “Dad, my legs don’t work.” They rushed to the emergency room, where doctors knew it was some type of virus, but they didn’t know what to do. “I went into the lobby, got on my knees and prayed,” DiPetrillo said. “Somehow, this doctor who wasn’t a pediatrician, wasn’t even supposed to be in the emergency room, took a look at my son’s chart and said, ‘Do this and this and this.’ Pretty soon, my son was recovering.”

DiPetrillo, who said he has been blessed in business and in life, said he wanted to provide a means of hope for other parents. God’s Little Blessings, hopefully supported by sales of a product that solved a gnarly conservation code problem, aims to do that. “How much money does a person need, anyway?” DiPetrillo said. “These children really need the help.”

Nick Reiher, a 1981 graduate of the Medill School of Journalism, has spent the past 40 years in community news. He joined the International Code Council as a freelance writer in August 2011.